A Living Wage, a Viable Economy, a Liveable City Region

Posted on 9 November, 2014 by benjaminirvinepress 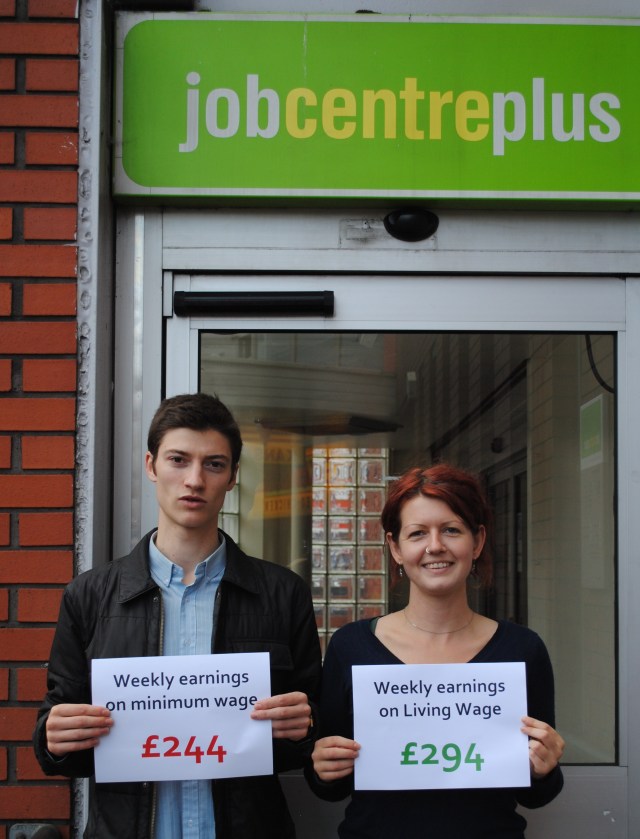 The difference between the NMW and the Living wage is around £50 per week and £2’000 per year. Which has something to do with why over 50% of those in poverty are in-work.

This week was Living Wage Week. The new Living Wage rate, uprated in accordance with increases in the cost of living, of £7.85ph outside London was announced. At least 21.8% of people in Greater Manchester currently earn less than it, and this is similar across the UK. To mark the event SSM, along with signatories from other Campaign groups including GMB Union, the GM Living Wage Campaign and the Green Party sent an open letter to the leaders (and city mayor) of the Greater Manchester Local Authorities.

The letter urged them to take action on in-work poverty and inequality and demonstrate a commitment to the Living Wage and principles of Fair Pay. It’s below:

We wrote to you in May 2014 asking about your plans to reduce pay inequality through a Living Wage and a commitment to Fair Pay. We received no response.
This week is Living Wage week and we are writing to you again to urge you to champion the Living Wage and Fair Pay.
We are very encouraged that the all of the councils in GM have demonstrated a commitment to paying a living wage to their direct employees now or in the near future, and that many have recently uprated their living wage policies to meet the official Living Wage Foundation rate of £7.65 during 2014.
However, although raising bottom pay to a Living Wage has marginally reduced pay gaps, in 9 out of 10 Councils (with the exception of Rochdale) top pay is still over 10 times that of the lowest paid, with top earners still in the top 1% of earners in the UK.
Little progress has been made either, in securing a living wage for outsourced council workers or making outsourcing companies accountable for pay gaps, which can see top managers earning up to 200 times that of the lowest paid.
We urge all GM councils to:
Implement the new Living Wage rate of £7.85 per hour as soon as possible and demonstrate commitment to the Living Wage now and in the future by becoming accredited Living Wage Employers.
Reduce their pay gaps over time so that no employee earns more than 10 times that of the lowest paid, this would help pay for a Living Wage for all council workers and demonstrate a commitment to Fair Pay to the private sector.
Ensure all workers employed in the delivery of outsourced council contracts are paid the Living Wage.
Make outsourcing companies accountable for pay gaps by including them as a consideration in awarding contracts.
GM councils should also work together to ensure the savings made by the Treasury from implementing a Living Wage for all council workers, are transferred through the city deal arrangements to help cover the cost and further tackle low pay and poverty in the region.
We believe the GM councils can, through these steps, create a more equal economy, one which is better for everyone and more sustainable, by reversing the disparities that have opened up between high and low earners.
We look forward to hearing from you.
Yours sincerely,

A large number of Greater Manchester residents have also expressed their support.

The letter follows from one sent earlier this year, in which we asked what plans Local Authorities had to tackle income inequality and in-work poverty, if they would make a Living Wage a performance requirement for companies undertaking council contracts, reduce their pay gaps and make outsourcing companies accountable for pay gaps too.

It was based on the report we did with Equality North West, which argued that tackling income inequality is not only key to an economy which is a fairer but is an essential part of sustainable development if we are honest about resource constraints, climate change and solidarity with the majority world.

Whilst the majority of GM Councils are supportive of the idea of the Living Wage, recently uprating previous lower city-specific living wage rates to the official Living Wage Foundation rate for their direct employees, or hoping to do so soon, this support is thin:

Little progress has been made on outsourced contracts: of those that have any intention to influence contractors they have tended to adopt ‘encouragement’ strategies, rather than aiming for 100% compliance by making it a condition of contracts. Research suggests 73.6% of Manchester City Councils contractors don’t pay a Living Wage. Islington council has secured Living Wage on 98% of their contracts in contrast.

As we said in our report, without making a Living Wage a condition of contracts, a Living Wage for direct employees only, is likely to leave indirect incentives to outsource services based on lower labour costs as councils are forced to find savings, undermining and negating any progress on pay equality.

Reluctance to become accredited: Salford City Council was the first accredited Living Wage Employer in the North West but it is the only accredited GM Council. Manchester is currently deliberating over the specifics of its Living Wage policy and is apparently reluctant to become accredited as it’s worried it won’t be able to keep meeting the uprating in line with inflation. This doesn’t demonstrate a sustained commitment.

Accreditation also requires a commitment to work to secure the wage for subcontracted workers, so this reluctance compounds the above point.

No commitments to more equal, Fair Pay: Whilst reducing the top-to-bottom pay ratio of Islington Council to 1:10 was the complimentary measure taken by Islington to reduce inequality, alongside securing a Living Wage as far as possible, in 9 out of 10 GM Councils the gap is still above 10 times the lowest (now ‘Living’) wage, and none have targets to either maintain or reduce it. The largest gap is in Manchester where the CE’s top salary of £203’782 is 14.6 times the annual Living Wage salary of £13’955. This puts all those Chief Executives in the top 1% of earners in the UK.

Devolution, economic powers and the character of growth: This week also saw the announcement of a major devolution deal for GM. It will see decisions over spending in key areas like housing, transport and infrastructure being made at the GM level as a strategy to better deliver economic growth for the region. The question we should be asking is does it increase GM’s power to choose the character of its economic growth, power to produce a more equal distribution or even to pursue forms of qualitative economic and social development not just an increase in the volume of activity?

If the idea of the Living Wage is to remain patchy, rather than a new ambitious national minimum, then, as people have been pointing out for some time, Central Government and the Treasury are a major beneficiary of councils paying and securing the living wage from suppliers. It would therefore make sense for this saving to be reimbursed to them to help cover the cost. Unfortunately that doesn’t appear to have been arranged as part of the deal, it should be a priority.

If Greater Manchester is to have more democratic political and economic autonomy to build the regional economy it wants, (perhaps an economy for all), wouldn’t measures to secure a Living Wage and encourage Fair Pay form a central part?

We’ll post any replies we receive to the open letter here.

1 Response to A Living Wage, a Viable Economy, a Liveable City Region