Posted on 24 September, 2015 by The Steady State Manchester team

Some months ago we reported on our attempts to encourage Greater Manchester Pension Fund to rethink its investment strategy, using explicit ethical criteria as part of its overall strategy for sound investments and returns, and in particular to move money from fossil fuel companies to the viable economy – where possible the local viable economy.  With 15% wiped off the value of mining giant Glencore in two days this week, (some £9M of GMPF’s money) and falls in other fossil fuel companies over the last year and more, GMPF’s exposure is looking like a poor financial strategy (in ensuring pensions can be funded), as well as a highly environmental practice.

Now the campaign has got a lot bigger.  Nationally, Friends of the Earth and the Fossil Free campaign have, using Freedom of Information requests, collated data on all the local authority pension funds in the country.  This shows some £14 Billion of fossil fuel investments.  And the biggest pension fund, our own Greater Manchester Pension Fund accounts for approx £1.3 Billion (nearly 10%) of that.  Indeed, it is one of the highest investors in fossil fuels in the land, with 9.8% of its money in potentially unburnable carbon. 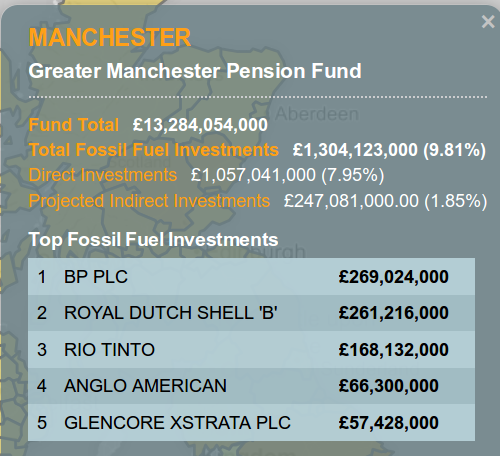 Today, Steady State Manchester was pleased to be part of Manchester Friends of the Earth Action at the GMPF Headquarters.  You can sign their petition HERE.  The action made BBC North West tonight – see the coverage http://www.bbc.co.uk/iplayer/episode/b06bpsnm/north-west-tonight-24092015 It starts at 16.04 minutes in.

In the window, GMPF proclaim “Looking after the pensions of a thrid of a million members” – but given 10% could be in stranded assets, how accurate can this claim be?

Here is a report on today’s demonstration at GMPF’s headquarters in Droylsden, from the Manchester Friends of the Earth website.

Earlier today, a giant ‘dinosaur’ visited the Greater Manchester Pension Fund office in Droylsden, Tameside to call on the pension fund to divest from risky investments in fossil fuels.

Data released today reveals that the Greater Manchester Pension Fund (GMPF) has an astonishing £1.3 billion of public money invested through their pension funds in fossil fuel companies like Shell and BP. [1]The research by 350.org, Platform, Friends of the Earth and others, shows that:

Fossil fuel companies hold five times more carbon resources than they can burn if we are to meet the internationally-agreed safe limit of 2 degrees Celsius. This means fossil fuels are in fact stranded assets and must remain in the ground. Therefore, GMPF’s investment policy means Greater Manchester’s pensioners risk being left with worthless assets underpinning their retirement funds.

Spokesperson for Fossil Free Greater Manchester, Chris Smith said:“The new data released today shows that Greater Manchester Pension Fund has the greatest amount of all local authority pension funds invested in fossil fuels. These are risky investments not only for the planets future but also with the future pensions of fund members.”

Chris Smith added:  “Greater Manchester led the industrial revolution on the back of fossil fuels – and now it’s time for us to lead the world out of the fossil fuel era.“At a time when smart investors around the world are already ditching underperforming fossil fuel stocks, the fund risks becoming an investment dinosaur.”

“As local residents we’ll be calling on the Greater Manchester Pension Fund to stand on the right side of history and divest from fossil fuels.”

Greater Manchester Pension Fund member, Nigel Rolland said: “I am glad to be here today to tell Tameside Council and the Greater Manchester Pension Fund that I have been a pension fund member for over 25 years and I don’t want our money invested in fossil fuels. The fund claims to be investing in our future, but they are investing in the past. Fossil fuels are a dinosaur industry destroying the planet.”

This is the first time that the £231 billion of public money invested by local government pension funds has ever been broken down and released publicly, and their exposure to fossil fuels quantified.  The data shows that overall the 192 councils in the UK have £14 billion invested in fossil fuels via their pension funds.

Three quarters of these direct fossil fuel shareholdings are in only ten companies, headed by BP and Shell.A third of all oil reserves, half of gas reserves and over 80% of current coal reserves need to remain in the ground to avoid catastrophic climate change, according to a study by University College London. [6]

Consequently, there has been growing concerns about the long-term financial risks of fossil fuel investments, a ‘carbon bubble’ that risks taxpayers being forced to bail out public pensions in the future. [7]

A recent analysis found that California’s public pension funds, CalPERS & CalSTRS, incurred a combined loss of over $5 billion in the last year alone from their holdings in the top 200 fossil fuel companies. [8]

This data, available at www.gofossilfree.org/uk/pensions, offers the residents of Greater Manchester the information they need to ask why the Council is choosing to invest in risky coal, oil and gas.  Instead, the fund could reinvest this money into building new homes, clean renewable energy or public transport.

Oxford and Bristol City Councils have already taken a lead in making fossil free commitments, joining 40 cities internationally and larger institutions like the Norwegian Government Pension Fund. There are 389 institutions globally – including universities, faith groups, health groups and governments – that have committed to divest. [9]

Local residents who would like to join the local campaign to convince the Greater Manchester Pension Fund to divest from fossil fuels can sign a petition at www.foe.co.uk/act/manchester-divestment [10]

1. Data, including spreadsheets for each pension fund with a breakdown of investments, can be accessed at http://gofossilfree.org/uk/pensions/

2. The data was sourced by 350.org, Community Reinvest and Platform through Freedom of Information Act requests to the 101 administering pension funds.

3. This data is released as part of an ongoing campaign through Fossil Free UK to secure fossil free divestment commitments from local governments.  A divestment commitment is a principled commitment to wind down exposure to the Carbon Underground top 200 fossil fuel companies over a 5 year period. http://gofossilfree.org/uk/campaign-demands/

4. Fossil Free Greater Manchester is part of the Fossil Free UK grassroots network, which itself is part of a growing international movement calling on institutions to divest (sell their shares) from fossil fuels to take action against catastrophic climate change. http://gofossilfree.org/uk/about-fossil-free/

11. The 2014 Law Commission clarification on fiduciary duty concluded “that there is no impediment to trustees taking account of environmental, social or governance factors where there are or may be, financially material” and that environmental concerns may also be taken into account as a non-financial factor so long as there is there is no “significant impact on returns” and “trustees have a good reason to think that scheme members would share the concern.”

12. In March 2014, following a clarification from the UK Law Commission on the interpretation of fiduciary duty, the Local Government Association (LGA) (England & Wales) published a legal opinion on how fiduciary duties affected the scope for a Local Government Pension Scheme (LGPS), concluding that “the precise choice of investment may be influenced by wider social, ethical or environmental considerations, so long as that that does not risk material financial detriment to the fund.”