Building a picture of well-being in a viable economy 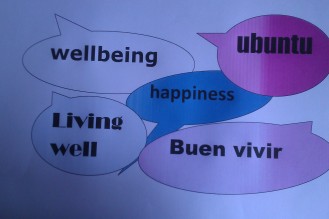 Our next cafe conversation will be on Monday 23rd May, at Cross Street Chapel, Manchester M2 1NL.

What can we learn from the majority world? For example, in many parts of Africa, Ubuntu underpins thinking, an underlying collective philosophy that  ‘I am because we are’. What can we learn from Latin American Buen Vivir, a culture of life which strives for solidarity and harmony between humans and nature.

Resources on our website make excellent background reading and watching including this recent short paper by Kothari, Demaria and Acosta on buen vivir, ubuntu and ecological swaraj:

See you there! Book now!

Are you finding it hard to get excited by the EU Referendum? You are not alone.

The campaign lacks many features that made the Scottish Referendum exciting and involved so many people (turnout 87%). In the EU Referendum there is little vision and hope on either side. With big imperfections within the EU and going it alone, it would be nice to think the impact might be irrelevant.  But can we ignore growing nationalism here and elsewhere and threats to the environmental and human rights which do get some attention from the EU?  Is it important to get out and argue for the lesser of two ills?

Nearly everyone at our cafe conversation on 19th April will vote to remain in. However, reasons given to stay included:

We shared helpful resources; can you add anything to the list?

Another Europe is Possible: http://www.anothereurope.org/

This detailed and helpful briefing was made in response to comments in a (very large) Facebook group in Wales.  http://lenarthur01.blogspot.co.uk/2016/04/pontyclun-hub-review-of-eu-debate-so-far.html