What kind of a city and region do we want?

Posted on 23 February, 2017 by The Steady State Manchester team 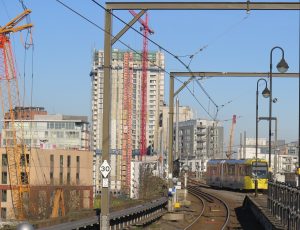 Someone once told me that for Sir Howard Bernstein, the retiring Chief Executive of Manchester City Council, his measure of success was the number of cranes visible on the city’s skyline. True or not, the anecdote captures something of the official line on the development of Manchester and its region: create conditions for building and the rest will fall into place.

Is that the kind of city and region we want to live in though: one where the strategy is to capture the, often speculative, investment in buildings, on the assumption that economic “growth” will follow, bringing benefits for the population?

We question the assumptions at each stage in that argument. Wise economic development need not rely on capturing inward, and flighty, investment. A shiny built environment does not bring the kind of economy that the city needs: instead the result can be empty office space and inflation of housing costs, bringing a lack of affordable housing and spaces for the kind of small, labour-intensive, low material-throughput business that could spur a resilient economy that shares its wealth while providing needed products and services. And the “growth” that arises (some of which is no more than the rental, and sale and resale of the new buildings) does not “trickle down” but instead, if anything magnifies the inequalities of wealth, income and experience that bedevil our city and region.

The strategy in crisis?

The good news is that the opposition to this flawed model is growing. Planners and activists alike have been surprised by the upsurge of opposition to the Greater Manchester Combined Authority’s Spatial Framework. That opposition has come from environmentalists, housing activists, policy experts, community groups and from MP’s (with the front-runner in the GM Mayoral contest calling for a radical rewrite), councillors, and at least one council is set to oppose it. The plans to erode the Green Belt have been one much discussed aspect of the opposition, but there has also been criticism of the economic model and of the modelling of demand that underpins it. 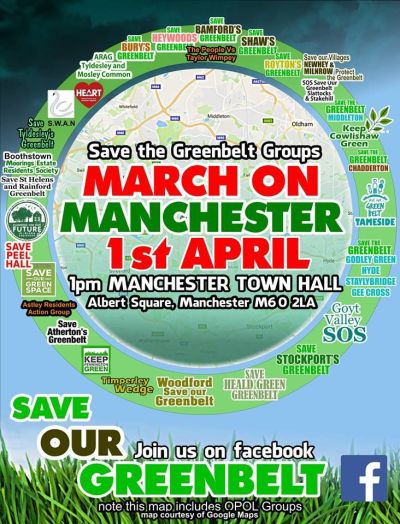 Other plans have also run into storms. The Combined Authority made substantial loans to developers to build flats on Pomona Island, an area of abandoned former dock and industrial landscape between the Irwell and the Bridgewater canal that had reverted to green cover with wildlife finding it a haven. Rather than capitalising on the green space and creating a much needed eco-park, potentially with some affordable rented accommodation, the conditions on affordability were waived and the building is going ahead. There was a campaign, but it didn’t get quite the traction it needed. Nevertheless, it served to rehearse the arguments against the standard policies and practices and their “sweetheart deals”, while raising the question of green space versus building that takes no account of context.

Skyscrapers in the historic centre? 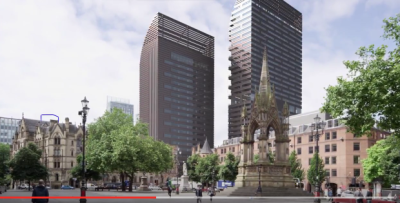 The proposed Bootle St twin towers. From the planning application. Click for video.

Close to what is now being called the “civic centre” (i.e. Albert Square and the Town Hall / Central Library area) is a rather run down area stretching to Deansgate. There is a need to improve the area via sensitive development and conservation. What has been proposed (and backed by the council, although some councillors dissent) is the St Michael’s scheme, from “Make Architects”, with investment from two footballers, to knock down the former Bootle St Police Station, the Sir Ralph Abercromby Pub (where Peterloo protesters sought refuge and the injured were tended) and the Reform Synagogue. In their place it is proposed to put two enormous (i.e. totally out of proportion) and ugly tower blocks that would overshadow the said “civic centre” creating a hard, windy area full of luxury flats, premium office space and 5 star hotel rooms (all of which the city is alleged to be short of). A pre-application public consultation found that 70.4 per cent of those consulted were opposed to the plans, yet the revised proposal is little different. Thanks to the efforts of local activists, the plans have been exposed. A petition has so far gathered more than 3,500 signatures. The following bodies have questioned the plans: Historic England, the public body that looks after England’s historic environment; The 20th Century Society which exists to safeguard the heritage of architecture and design in Britain from 1914 onwards; Save Britain’s Heritage and The Victorian Society. As the detailed objection from the campaign group “Manchester Shield” demonstrates, the proposals multiply contravene the city council’s own planning guidance.

Another development of tower blocks (although this time for a more appropriate mix of accommodation) would similarly overshadow Castlefield, the UK’s first designated Urban Heritage Park and a short-listed Unesco World Heritage Site. It has already been approved by the planning committee but also hit problems, with the possibility that the proposal will be called in by the Secretary of State.

A case study: decoding the model

The Bootle St proposal is worth looking at (before objecting). The economic theory is set out thus:

“…. Manchester has developed strongly post-recession and the foundations for further growth are in place. A key success is the increased diversification of the economy with an increasing amount of GDP growth attributable to new economies including Creative and Digital and Advanced Materials. Manchester’s growing reputation in these fields will drive further growth and allow it to establish itself as a hub on a national and international scale. These industries will complement Manchester’s already strong and growing position as a centre for Financial and Professional Services.
“However, there is still a significant amount to be done to support further economic growth within Manchester and to close the significant gap between public spending and tax generated within Greater Manchester which is calculated to be £4.7bn a year. To do this, Manchester City Council needs to ensure that the right development comes forward to support future growth.”

So we have to suffer speculative and ugly skyscraper building in order to pay more tax to central government – the spurious argument about the “fiscal gap” – when we should instead be campaigning for redistribution from the bloated economy of London and the South East.

“The Design and Access Statement and Regeneration Statement explain in detail the need for further offices, hotel, leisure and residential uses within the city centre, and also the opportunity to help meet this need which is presented by the application site. In summary, the proposed development addresses specific, strategically identified needs for:

So the whole proposal, like others, is based on the same flawed strategy of “build->growth->trickle down” that can be challenged at every point, and has been, for example in this paper from Manchester Business School academics, as well as in our own work.

In the Bootle St case the council itself stands to gain from the deal, as an Evening News article notes:  “Then at a later date the town hall intends to sell it on – at a massive profit, in all likelihood running into the tens of millions – and share the proceeds with GMP.”  So in the context of central government imposed austerity, the council is yet more incentivised to strike deals with what have been called “aggressive” private development plans.

As a critique published in the Guardian notes:

Developments such as St Michael’s [i.e. the Bootle St plan] are designed instead with the transient in mind: the buy-to-let landlords; the high-earning long-distance commuters who need a Monday to Thursday crash pad; and presumably other footballers and their entourages. Prices haven’t been discussed but are rumoured to be “very high-end”.

However, this “high end” emphasis also reflects the dominant economic strategy in the city. By increasing asset prices, and the amount of rent paid, the city’s GVA (a crude measure of the size of the economy) gets inflated – growth achieved! But this is not something that benefits the city or the people living here. This magical economics fails to identify what we actually need the economy to be delivering for the people of Manchester, and indeed, the attraction of high-earning professionals into the city seems to meet what a cynic might see as the undeclared policy of bringing a “better population” into the city because the existing post-industrial masses won’t make the city rich. Hence the emphasis on high rent flats and the marginalisation of social housing? While this is going on there are more than 11,000 empty homes across Greater Manchester. The Combined Authority has made noises about reducing them (and could learning from experience elsewhere), but it does rather appear that the policies are not joined up, in conflict even. The former central government housing market renewal initiative (Pathfinder) did nothing to improve matters – the clue is in its title: the housing crisis is not going to be resolved with yet more market tinkering nor by giving free passage to footloose capital.

There’s more: the high levels of investment in buildings are a consequence of the failed economic system. Declining profitability of industry means capital seeks other avenues to reap profits and hence pursue high “growth”. As the geographer David Harvey has shown, a favourite option is investment in, often speculative, city centre building projects – what he calls the “spatial fix”. Not everyone in leadership positions meekly accepts this as “realism”. In an article last year for New Start magazine, Tom Riordan: CEO, Leeds City Council, for example observes, “Where does money end up in pro-growth agenda? In buildings” and he suggests alternative priorities for addressing inequality and poverty in a city-region not unlike Manchester’s.

What kind of a city region do we really want?

Some cities, like Edinburgh choose a more human scale.

This question needs answering both at a local scale: what might a human scale and environmentally enhancing refurbishment of the Bootle St area look like? – and at the scale of the City Region – what do we want to enhance, build and preserve and how should the landscape of GM be organised? We have been looking at two dimensions of this question, applicable at whatever scale:

Firstly, how might space be best used to make our city more liveable, more resilient, while meeting needs? The Garden City concept, retrofitted to the city region is just one idea that interests us and we’ll be exploring it at our event on 2 March.

Secondly, how can we ensure that the citizens of Greater Manchester can make informed contributions to the design of solutions and contributions that have clout? There are examples to learn from, from places like Curitiba, Barcelona and Freiburg, but adapting them to Manchester, while innovating ourselves, will be a challenge. New policy- and action -research from the University of Sheffield on shared city governance might help too, though the time is now, as the old consensus shudders and a new one strives to come into being.

4 Responses to What kind of a city and region do we want?