Policies, policies, but are they any good?

Posted on 19 July, 2017 by The Steady State Manchester team

Earlier this year we published our paper: Policies for the City Region. How does what we are proposing differ from what others are saying? Where do we agree with others proposing alternative approaches to the ones that have dominated our cities and regions in the recent past?

To explore this, we’ve made a comparison of our Policies for the City Region with three other offerings:

We chose these because they all focus on the same context that we did: the devolution of some central government powers to City Regions and the establishment of new governance arrangements, including the new Metro Mayors. All would be described as centre left in orientation politically but each makes some moves to break with the former consensus established under New Labour (harnessing the market, finance and urban speculative development with the promise of trickle-down redistribution at some unspecified date in the future).
CLES has focussed on local economic development with a strong economic and social justice agenda. They have emphasised the role of “anchor institutions”, including councils, as economic actors with potential leverage for principled economic and social change, not least through soft powers of “place-shaping”.
IPPR is rather more conventional, but, particularly from their Northern branch, have made some suggestions that speak directly to the problems of maldistribution in our city regions.
Finally, Burnham, while from the Labour Party mainstream, was also an MP representing a peripheral area, not associated with the neoliberal regime that has dominated Greater Manchester politics and strategy. He crowd-sourced his manifesto (learning from the radical democratic project of Greater Manchester People’s Plan, which unfortunately didn’t live up to its promise due to circumstances beyond the control of key actors and a general lack of capacity). Significantly, Burnham signalled a break from the urban development strategy2 of city centre flats and offices, peripheral warehouses and distribution hubs and green fields housing for commuters, instead arguing for a strategy that renovates the region’s (post-industrial, left-behind) towns.

We cannot pretend that this is an exhaustive set of relevant offerings for comparison but these are approaches that might have some synergy with our own, while revealing both where we make a distinctive pitch and also where we have gaps.

We conducted a close reading of the policy papers, and produced a long comparison table, structured according to our own Policies for the City Region. From this we made ratings of the weight they give to a number of key policy themes, and we graphed those ratings. We produced word-clouds (using http://www.wordclouds.com/), based on frequency counts from each text (taking out high frequency words that have no particular policy meaning). We do not pretend that our methodology was particularly sophisticated, although we do have experience as qualitative and quantitative social science researchers. We are satisfied, however, that it does the job we need it to do, that is, to elucidate the key policy themes as they differ and overlap between the four frameworks.

Across the four frameworks, the following were key themes:

According to this analysis, for Steady State Manchester, energy transition was the most important, followed by (equal ranked) economic localisation, community and democratic accountability.

For CLES, anchor institutions was most important, followed by national redistribution, and (equally ranked) community, jobs (supply side), and finance.

For IPPR-North, the emphasis was equally on energy transition, finance, national redistribution, health and social services and democratic accountability and governance.

However, the similarities in the overall headings hide some differences of emphasis. So while SSM emphasises an overall reduction in energy usage as well as conversion to clean energy (with large reductions on aviation and motor car usage, affordable low-energy housing central demands), the Burnham and IPPR-North proposals are less radical. CLES, however ,has nothing on this theme in their manifesto.

None of the other three frameworks came out strongly for the kind of radical economic localisation that SSM has been calling for, and IPPR seems to go in the other direction, seeking to “Prioritise international profile and connectivity, and collaborate to drive trade and investment”. However, CLES, and to a lesser extent, IPPR-North both give attention to the role of anchor institutions which we can see as aids to a re-localisation of the economy.

While Finance does not feature in SSM’s top four themes, we nevertheless give it serious consideration, as do IPPR-North and CLES: strangely the Burnham manifesto has little here, a missed opportunity since the mayor could really help push for strong local and regional financial institutions serving economically excluded communities as well as local business.

We all have ideas about jobs and income, but differ in emphasis. Burnham and IPPR-North give roughly equal consideration to supply and demand side levers. SSM only considers the demand side (and indeed is sceptical about the effectiveness of tinkering with supply factors like qualifications) and CLES, surprisingly perhaps has more to say about the supply side.

Of course, the four different interventions are doing different things: SSM is consciously presenting a radical alternative that integrates the economic, social and ecological, within our Viable Economy framework. CLES is seeking to influence and work with the incumbent administrations who fund much of its work (in the order of half its funding but from authorities across the country – funding from GM authorities is relatively small), with a particular emphasis on the construction of the social and economic dimensions of place through institutional leverage. IPPR-N is largely orientated to the policy community, updating a broadly right social democratic model of the State-economy relationship. Burnham was both fighting a campaign and managing the potential clash between entrenched power in the city region and the demands from community and labour movement, while also seeking new ideas given the expiry of the neoliberal consensus nationally and locally. An index of these differences is the differing emphasis given to spatial issues. For SSM, these are critical because they are where we can see the relationships among community, economy and ecology made manifest, negatively as in the consequences of Manchester’s flawed and patchy regeneration and redevelopment and positively, as in the possibilities for a retrofitted city region as garden city – both rural and urban – in response to the existential eco-socio-economic crisis of these times. For Burnham, as noted, the situation of those areas, “the towns”, that haven’t benefited and won’t benefit from the boom in the Southern and city centre districts, is a critical concern, conveniently perhaps allied with the movements to resist vandalistic rebuilding of the centre and the trashing of green spaces in and around the conurbation. It is not surprising, then that spatial concerns are important for both, but they are pretty much absent from the contributions of IPPR-N and CLES.

We too have gaps in our contributions and some of these are, in effect, addressed by the other interventions. We’ve had little to say (as SSM) about service provision (education, health, social care) despite expertise in these areas within our collective: it’s not that we aren’t interested but rather, as a group, our focus is elsewhere. However, perhaps surprisingly we have rather more to say about social security, benefits and their relations to work and community than the others, at least in the pieces we’ve considered (IPPR itself has had a lot more to say on the matter, for example in a much bigger, and often problematic, piece of work, the Condition of Britain report3).

You can explore the comparisons yourself: 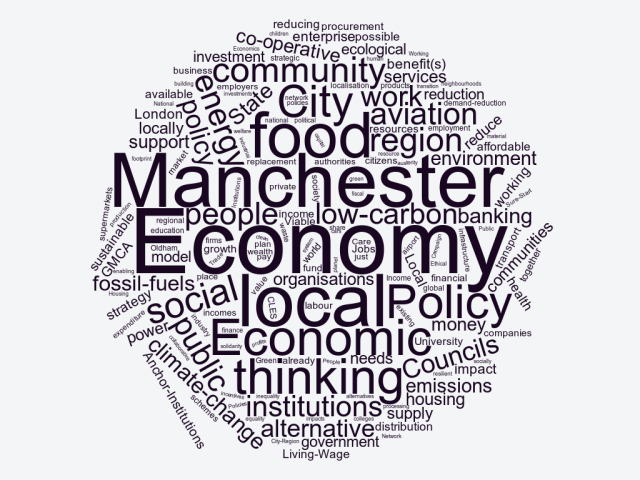 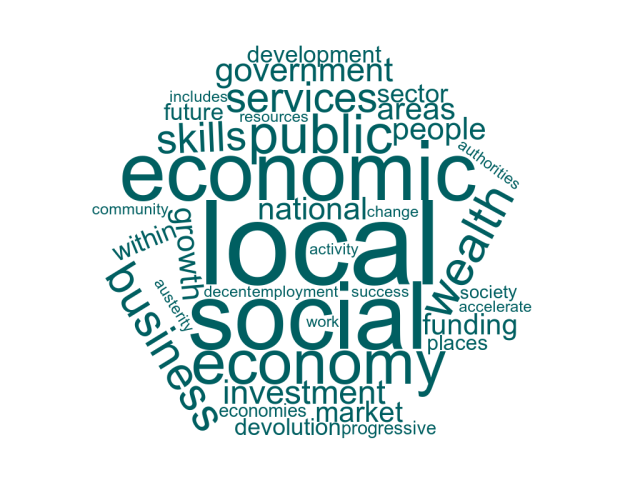 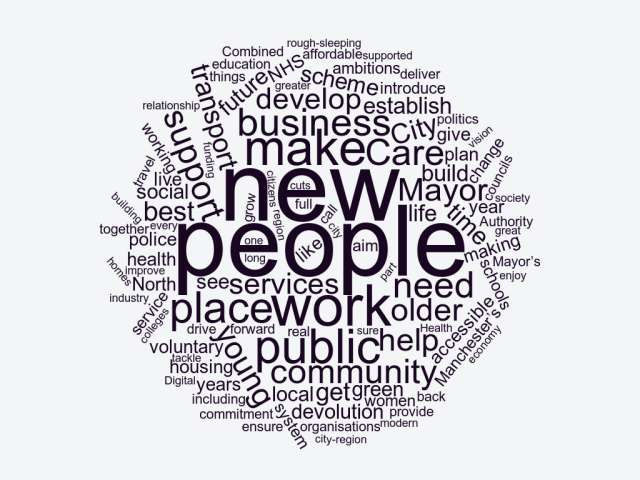 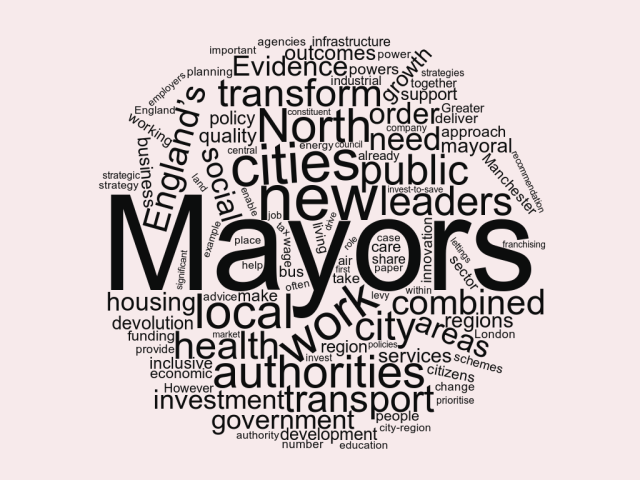 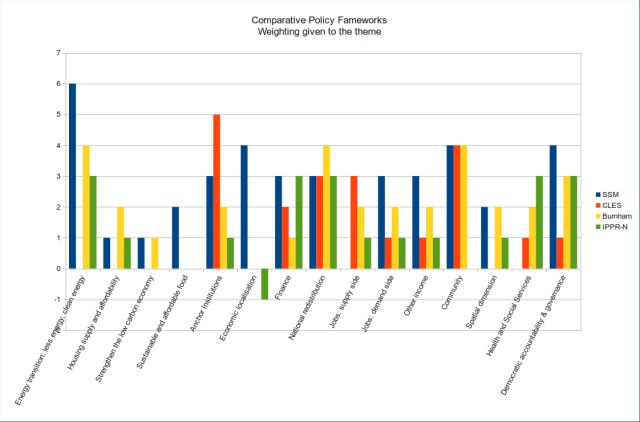 policy comparisons ratings compared to the other 3 groups’ offerings

We think our approach is the best (of course) – dealing with the real issues that face us all, even if there are gaps, and avoiding false solutions.  But what do you think?  We’d welcome your thoughts.

1The campaign website has now been taken down. Some manifesto pages have been archived here: http://web.archive.org/web/20170706124010/http://www.burnhamformayor.co.uk/ourmanifesto and we made a composite pdf file of all the separate manifesto sections: here.

2For our analysis and links of the orthodox spatial strategy see https://steadystatemanchester.net/2016/12/23/greater-manchester-spatial-framework-our-response/