What’s gender go to do with the viable economy?

Posted on 2 August, 2017 by The Steady State Manchester team 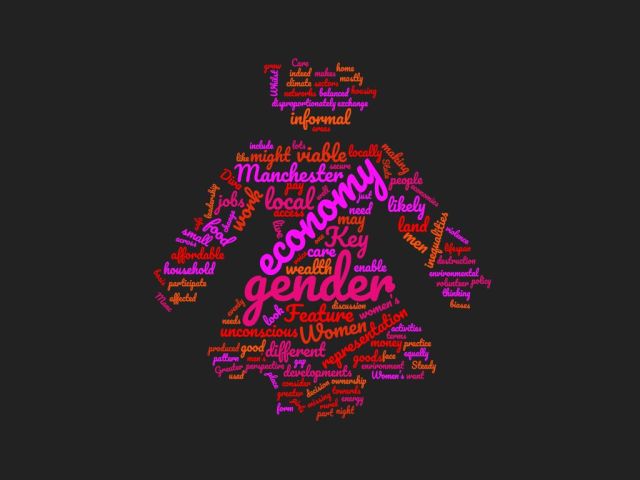 A small, thoughtful group met in Manchester City Centre to consider some of the key features of Steady State Manchester’s flagship policy proposals, the Viable Economy on a sunny summer’s night. We talked about the gender implications of the different aspects of the Viable Economy and also looked briefly what might be missing in Diva Manc’s Calls to Action (for a Greater Manchester that Works for Women ), presented to the incoming Mayor of Greater Manchester, in terms of the viable economy.

A number of issues ran through the discussion:

We had a wide ranging discussion, drawing on examples of practices and projects with women very centrally at the core.

VE Key Feature 1. Living Well and more equally. More is produced locally, providing decent green jobs and spreading the wealth. Women in general can only benefit if wealth is spread more evenly. There is a large gender pay gap at the moment starting at apprenticeship level and continuing through the lifespan to pensions. Local production could be more convenient, and enable women to juggle home demands with paid work, but as more distant jobs close, questions would need to be asked about who then loses their jobs, and who gains in local jobs. In part it will depend on what is produced locally. In rural areas, the local economy depends entirely on the unpaid work of women in problem solving, attending markets, dealing with money, and doing administration for farms and small businesses.

VE Key Feature 2. We are more secure because the environment is protected

from further destruction. Globally, women are disproportionately badly affected by climate change for lots of different reasons. Less environmental destruction will enable them to maintain livelihoods, live healthily and not suffer from environmental disasters.

VE Key Feature 3. Resilience: access to goods, especially food, will be more secure should there be shocks. In terms of resilience, a lot can be learnt from the informal social networks developed and maintained mostly by women in both rural and urban areas that, for example, support children, bring cultural activities to localities (for example, school fairs, park festival), share care. More women organise, and run the activities and stalls in some local festivals, such as Woolfest in Cumbria, whilst men mostly participate passively. This pattern is repeated at different levels. Whilst men and women are equally likely to volunteer, women are more likely to undertake informal volunteering, and to do this on a regular basis. Women are more likely to volunteer locally. Women form the ‘glue’ that holds communities together and makes places good to live in.

There are lots of examples of ‘exchange economies’ where local people form networks (usually organised by women) to exchange food, tools, unwanted goods. Whilst e-platforms enable some of this sharing, the most resilient examples are face to face exchanges.

VE Key Feature 4. More money stays local – our city’s wealth will be used for needed developments, for example energy efficient, affordable housing. It will be important to look at land ownership and how land is treated as an asset. The vast majority of peri-urban privately owned land is held by men, although the pattern may be changing as younger people acquire land through joint ownership. If women are not represented on decision making bodies, likely developments will be gender blind. (Just having women’s representation does not ensure a viable economy approach, but nor does not have women’s representation!). More promotion might be possible of informal money systems, like the Xitique of Mozambique – small, informal, collective savings process outside banks and not involving repayable interest.

VE Key Feature 5. Balance. Some sectors must grow (e.g. renewable energy) and some must shrink (e.g. fossil fuels). Women might well have a view on which sectors should grow the most and the fastest. The things that affect their lives more, maybe than men’s, include public transport, the manufacture of ‘light’ goods that can be carried easily (e.g. carbon neutral reclaimed wood bricks for fuel), home care, shorter working weeks, children’s shoes. The specific as well as the common interests of women need to be given voice. We are so used to not thinking about gender it can be difficult to facilitate this voice in practice rather than just in theory.

VE Key feature 6. Focusing on the things we want the economy to deliver, rather than growth for growth’s sake (GDP and GVA measures). It makes no sense to think of the economy without thinking about the household or about community maintenance, both largely women’s concerns. Ask women and the things ‘we’ want may look different. For example, if greater availability of fresh food is one such thing, who will collect and prepare this food? How will household tasks and caring be more evenly balanced. Care as an ethic for the economy, rather than a practice, about which women have written (see work by Julie Nelson amongst others)

So what is missing from the viable economy that Diva Manc has promoted?

Gender balanced leadership and representation and enabling women to contribute to policy making. This is about not leaving it to chance, but finding active ways of encouraging and supporting women to participate and take on leadership or representation roles. It is also about how local decision making happens and whether existing processes are gender friendly and accessible for women. Women’s loyalties may differ from men’s and this needs to be understood and taken into account.

Challenge conscious and unconscious bias against women – this is needed in everything we do and may start with some awareness raising of what unconscious biases might look like and how they operate.

Close the gender pay gap – The Viable Economy does discuss pay inequality. Indeed the one and only mention of gender in the pamphlet is in a section on inequalities, along with the other inequalities that must also be addressed.

Making Greater Manchester a place of choice for women and girls to live, work, study and care. This includes the delivery of quality of care across the lifespan; access to safe and affordable travel options; access to safe and affordable housing; and the ending of violence towards girls. More work needs to be done to include the household in analyses of the economy and violence towards women and safety as part of the spatial developments.

What can Steady State Manchester Do?

2 Responses to What’s gender go to do with the viable economy?