Does ecological sustainability mean the end of growth and capitalism?

Posted on 7 November, 2018 by The Steady State Manchester team 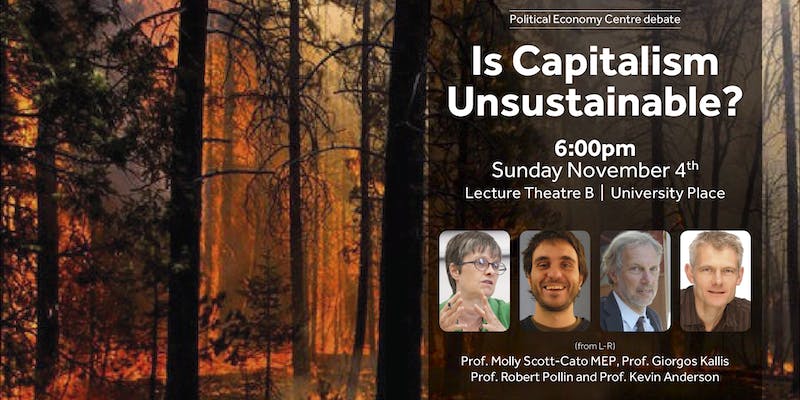 On Sunday 4th November, people from Manchester and beyond packed a lecture theatre at the University of Manchester to hear a debate titled “Is Capitalism Unsustainable?”, organised by the University’s Political Economy Centre.  The speakers were local climate scientist Kevin Anderson, MEP and “green economist” Molly Scott Cato, ecological economist and political ecologist Giorgos Kallis and Economist Robert Pollin.  Kallis and Pollin participated by video link from Barcelona and Massachusetts, respectively.  The title was maybe a bit misleading since a lot of the discussion was about the economic strategies for dealing with the climate emergency, but inevitably this is also about the dilemma of green growth versus degrowth and the future of the capitalist system.  It was rather ironic that it took the non-economist on the panel to explain most clearly how the present economic system of endless growth and grossly unequal accumulation must be confronted head on if there is to be any chance of averting this crisis.

Below is an analysis of the debate by Peter Somerville, a Manchester resident and academic at the University of Lincoln.  He and I have also written a longer critique (available on request) of Pollin’s recent article in New Left Review which promotes the green growth idea.
I agree with most of what he says, though I think the debate between growth and degrowth is still relevant.  In a question from the floor, Beth Stratford made an interesting point that perhaps the only way to make green growth work is via resource and energy caps – i.e. legislating to restrict the flow of finite and polluting resources into the economy.  Such an innovation, not a very likely prospect maybe, could transcend the degrowth – green growth debate.  I also disagree with Peter’s final comment on the “who is greenest?” game: people in positions of influence and leadership really do need to take the high moral ground and model actions and lifestyles that are resource-light, such as refusing to fly.
Mark H Burton

Some comments on ‘Is Capitalism Unsustainable?’
Peter Somerville

There were problems with both the conduct and content of this debate. On the conduct side, each speaker presented their case reasonably well (although unfortunately, I couldn’t follow what Bob Pollin was saying, at least initially, because of the poor quality of the video link, and they tended to speak too quickly and cover too much ground in the time). After the presentations, however, the Chair tried to get the presenters to ‘debate’ (as she put it), and they responded largely by repeating themselves while also managing to stray away from the question. In the end, none of the speakers managed to define either capitalism or sustainability.

Bob Pollin and Molly Scott-Cato both argued for some kind of green new deal, though from slightly different perspectives (social democratic and environmentalist, respectively). Molly saw ‘sustainable investment’ as the way forward (better than taxes, caps, etc), and argued that this could be done on a non-profit basis. She did not elaborate but, knowing Molly of old, I suspect this will involve co-operatives of some kind. Not only is this approach perfectly compatible with capitalism, but Molly also did not explain how it could possibly achieve a transition to a zero carbon world (or biodiversity or the non-exhaustion of key minerals). So Molly managed to fudge not only the issue of whether capitalism is sustainable but also the issue of sustainability itself – clearly a consummate politician!

Bob was more specific than Molly on the nature of green investment, and on this he made some useful points (which are developed in his article in New Left Review). He was less clear, however, about how his green new deal would keep fossil fuels in the ground. I think probably everyone would agree with him that a just transition must include effective redeployment of fossil fuel workers, but such redeployment presumes that fossil fuel industries will first be decommissioned, and Bob was less clear about how this might be achieved. He believed that capitalism was sustainable but was not so forthcoming on the nature of capitalism and preferred to talk about ‘growth’.

Much of the session was taken up with an old debate on ‘growth versus de-growth’, which sadly were never defined. Consequently, none of the speakers distinguished between material growth/de-growth and value growth/de-growth. Marx taught us long ago that capitalism is based on capital as self-expanding value, and capitalist production exploits labour to produce commodities that have both (abstract) value and (concrete) use-value. In value terms, such production involves an expansion in socially necessary labour time. If this is what is meant by growth, then Bob is right to the extent that all capitalisms including green capitalism involve growth, because green industries are more labour-intensive – under capitalism more labour produces more value. This growth of value, however, is not the same as the growth of material output, which can be measured in terms of increase in the use of matter and energy. Historically, capitalism has indeed been associated with such material growth, but it is by no means clear that this has to be so forever. As Giorgos Kallis said, green industries tend to have lower technical productivity (that is, less material output per unit of labour) than fossil-fuel industries, so a transition to a low-carbon economy could involve real material de-growth. Giorgos seemed to want an end to capitalism, anyway, so it is possible that for him de-growth has both material and value forms.

Kevin Anderson clearly believed that capitalism was unsustainable but his proposed solution, namely the expropriation of global wealthy elites, global redistribution of wealth and income, and more or less permanent austerity, did not seem realistic, at least not on the time scale now required. Unfortunately also, this agenda seemed to get mixed up with a tiresome ‘greener than thou’ game, where people compete to see who can big themselves up the most for their sustainable behaviour (while beating others up for their unsustainable behaviour). This seems a poor substitute for a proper debate on the role of personal behaviour change in mitigating greenhouse gas emissions.

1 Response to Does ecological sustainability mean the end of growth and capitalism?