The degrowth niche: What does it mean for Steady State Manchester and a Viable Economy?

Posted on 26 November, 2018 by The Steady State Manchester team

The degrowth niche: What does it mean for Steady State Manchester and a Viable Economy?

Radical ideas and actions guide our work at Steady State Manchester as we advocate a better future for Greater Manchester. Our vision for a viable economy, and related policiesfor the Greater Manchester city-region, are informed by research and practice that challenge the dominance of economic growth, that embody social values such as cooperation, solidarity, and equality, and that promote stewardship for the planet. Among these influences on our work, the degrowth movement is gaining momentum as an alternative vision for the future. As it continues to develop, degrowth can and should continue to be an inspiration for Steady State Manchester and other groups that work toward a better future.

In a recently published journal article ‘A Degrowth Transition: Pathways for the Degrowth Niche to Replace the Capitalist-Growth Regime’, Claudio Cattaneo, Christos Zografos and myself argue that degrowth is a radical innovation to the current socio-economic system. Through an analysis of degrowth literature, we show how the field is developing over time and consider potential pathways it might follow into the future. We argue that degrowth is a niche – a small, relatively protected pocket of research and practice that is continuing to develop – and that it presents a compelling alternative to the dominant socio-economic system, what we call the ‘capitalist-growth regime.’ By understanding degrowth as a niche and how it is developing, Steady State Manchester and others can develop better ways for advancing our vision for the future.

This blog post will summarise the findings of our research, discuss two potential pathways into the future we identify, and comment on the relevance of this research for Steady State Manchester and our vision of a viable economy. I also include, for the visually inclined, some cool visualisations of degrowth research and citation networks.

To establish degrowth as a niche, my co-authors and I critically apply what is known as the multi-level perspective framework (Geels, 2004) and analyse degrowth literature to understand and visualise the dynamics of degrowth research. Because tables and charts can be terribly dry, I refer you to the article, (also available from author by request) for the full results of our analysis. Suffice it to say, the amount of publications and the citations of degrowth literature are both increasing over time, but there are a relative few number of authors both that are most frequently publishing degrowth research and that have highly-cited publications.

More interesting are the visualisations of degrowth literature. Below are few examples of those visualisations from 2008-2012, and 2008-2016. The first set shows co-authored research by geographic location of the authors. The second set shows authors that are often cited together in degrowth literature. In these latter two, the more that an author is cited alongside others – the more heavily they are relied on together – the larger their name appears. All visualisations are taken from the article (Vandeventer et al, 2019). 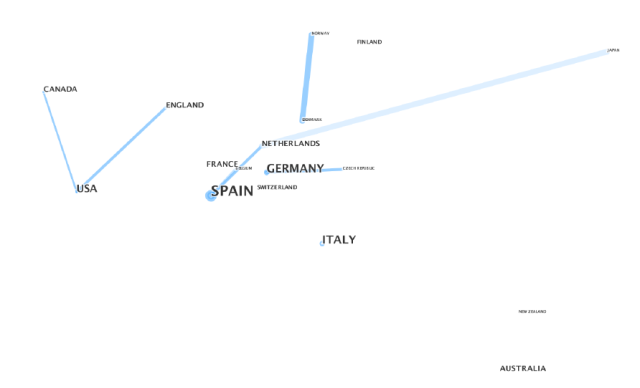 Authors frequently cited together in degrowth literature – 2008 to 2012 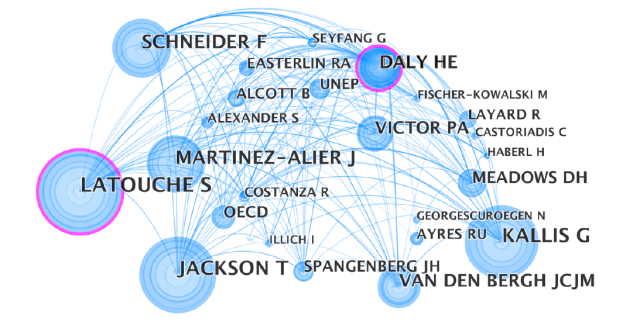 Authors frequently cited together in degrowth literature– 2008 to 2016

Our analysis shows how, in the degrowth literature, while there is an increase in the numbers of publications and citations, a relative few number of authors, including Giorgos Kallis, Joan Martínez-Alier and Francois Schneider, Joachim Spangenberg and Filka Sekulova, are most prolific. These works articulate core ideas of degrowth and set the vision and expectations for the field moving forward. The first set of visualisations show how many of these authors are based in Spain, but in recent years the dependence on researchers based in Spain (and specifically Barcelona) has given way to a multi-centred network of degrowth authors that is more geographically dispersed. In particular, hubs of research in England, Germany and USA are emerging. In our analysis, the development of degrowth is also clear through literature that considers degrowth in comparison to other visions for the future (such as steady state and sustainable development). These works reflect a critical exploration of the core elements of degrowth while maintaining an openness to new ideas and approaches. In the second set of visualisations, it is clear that authors are drawing on a range of historical scholarship (from authors such as Illich, Easterlin, Meadows and Castoriadis) to justify their critique of the capitalist-growth regime and, at the same time, engaging with contemporary literature both within and outside the degrowth publication network (including work by Jackson, Daly, Latouche, Fischer-Kowalski, Costanza, and others) to explore normative values and contemporary arguments and to relate them to degrowth. This narrative suggests degrowth is a dynamic and evolving field, but one that is becoming more cohesive. In fact, we suggest in the paper that this shows how degrowth is exhibiting characteristics of niche development according to the multi-level perspective. These include: the articulation of expectations and visions, building networks, and learning and articulation processes.

Looking ahead: pathways for change

Having established that degrowth is a niche, my co-authors and I lay out two potential pathways for change of the capitalist-growth regime. In both cases, significant pressures on the capitalist-growth regime lead it to severely de-stabilise, opening up opportunities for niches to step in. The paper explains these in more detail but, to summarise each pathway briefly, in the first – De/re-alignment pathway – involves collapse of the capitalist-growth regime and its subsequent re-alignment around degrowth as the new regime; in the second – what we call a Pluriversal pathway – following breakdown of the existing regime, degrowth becomes a model for some places, but a pluriverse of micro-regimes emerge that are relevant to local circumstances.

These pathways lead to significantly different outcomes, and the underlying logic behind each is likewise different. In the De/re-alignment pathway, niches compete until degrowth emerges as the preferred socio-economic system that hegemonically dominates the new regime everywhere. On the other hand, in the Pluriversal pathway, degrowth is symbiotic with other micro-regimes that are differentiated and do not compete for control of the socio-economic system. We consider this latter pathway more reflective of how human society organises itself – through cooperation, not ruthless, winner-take-all competition – and thus suggest degrowth ought to work toward this pathway for change.

What this means for Steady State Manchester and a viable economy

The argument that degrowth is a niche offers a compelling narrative about how degrowth is undergoing processes of development. By questioning the primacy of competition and introducing the possibility of cooperation, our paper opens up a discussion about processes of change not only for degrowth, but also for allies of the degrowth movement. Among these allies, we at Steady State Manchester and our vision of a viable economy could learn from the development of degrowth and a Pluriversal pathway for change.

First and foremost, we should continue to articulate our expectations for the future and our vision for a viable economy that is relevant to Greater Manchester. This should be adapted to contemporary changes, such as Brexit, the financialisation of housing in the city-region, and unpredictable weather patterns due to climate change. At the same time, we should continue to establish relationships with like-minded groups and individuals in the city-region with the aim to build a groundswell of support for the change we seek. In addition, we should learn from examples of success, such as the radical local government Barcelona en Comu or the participatory budgeting process in Brazilian cities, and also from other niche movements seeking change, such as the current work of Extinction Rebellion here in the U.K. Finally, the processes of articulating a viable economy for Greater Manchester should be informed by engaging with our members and allies, including those in the degrowth movement. By continuing our work and remaining guided by cooperation, we will help set the groundwork for a Pluriversal pathway as it becomes clear the capitalist-growth regime is destabilising and may be nearing collapse.

Based on this, there are some final considerations to think about moving forward. For one, how might a viable economy be different in other city-region contexts? What would be similar, what would be different, and what are the key local circumstances in determining the vision for a viable economy and kinds of policies to get there? A second consideration relates to engaging with other actors and institutions – what is the relevant scale, who can be legitimately considered an ally, and what key ‘anchor’ institutions should we focus on? Finally, how can a viable economy take concrete actions toward a Pluriversal pathway for change to the dominant capitalist-growth regime, and how does a viable economy envision the future socio-economic system of Greater Manchester?

I am grateful to Carolyn Kagan for comments on a draft of this post.

Geels, F. (2004). From sectoral systems of innovation to socio-technical systems: insights about dynamics and change from sociology and institutional theory. Research Policy, 33, pp. 897–920.