Posted on 6 December, 2018 by The Steady State Manchester team

As we know, climate change is with us already, harming the lives of millions of people around the world. It’s driven in large part by the continued exploration and burning of coal, oil and gas. To stop a further climate breakdown we urgently need to bring the fossil fuel era to an end. But the fossil fuel firms continue to extract, sell and burn as much coal, oil and gas as possible…. 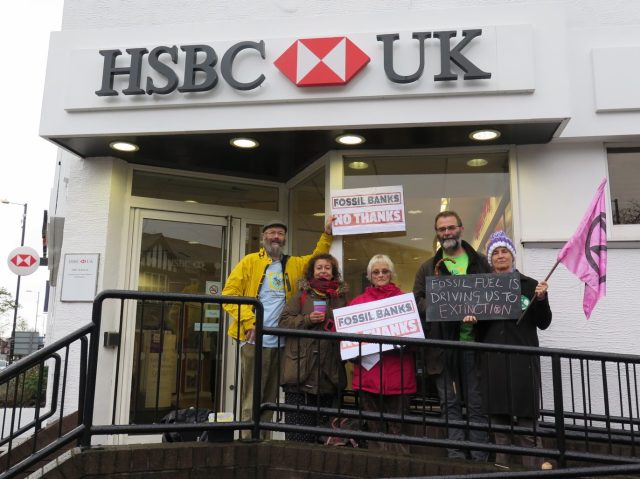 What have the banks got to do with it?

The big banks are financing this activity, funding new mines, oil and gas fields and pipelines. Between 2015 and 2017, just 36 global private sector banks funnelled already a staggering US$ 345 billion into extreme fossil fuel projects and companies alone. The worst banks in the UK (sum total of investments 2014-16) are:

HSBC – $13.2 billion although decreasing investment in new coal mines and moving out of tar sands;

Barclays – $12.5 billion and still increasing investment in a range of extractive and support industries;

RBS/NatWest $3.3 billion but significantly reducing their investments to $122 million in 2016;

Santander $3.74 billion – can you believe, increased spending after the Paris Agreement!

What can be done?

Only massive public pressure will make banks end their support for this climate-wrecking, fossil fuel industry.

If we don’t want our money to be used to finance fossil fuels and thereby climate destruction, Action on Climate Change urges those of us with accounts in these banks to switch to more ethical banks.

Fossil Banks No Thanks campaign

Steady State Manchester is one of many organisations to sign up to the Fossil Banks: No Thanks campaign. The campaign aims to put pressure coal mining, tar sands extraction, oil drilling, fracking, gas pipelines, deep water drilling, arctic drilling …

As part of the campaign there is a petition for individuals and organisations to join the global call for banks to cease funding fossil fuel companies. The demand is for banks to clearly and publicly acknowledge that stopping climate breakdown means putting an end to the exploration and burning of fossil fuels, as well as their support for the fossil fuel industry. The call is for the banks to publicly commit, by the 25th UN Climate Summit in November 2019 at the latest, to end their financing of all new fossil fuel exploration, extraction and power projects, and that they publish a robust and timed phase out plan for all their existing fossil fuel clients.