Places for Everyone hearings: the first week

Posted on 6 November, 2022 by The Steady State Manchester team

The Greater Manchester Places for Everyone Plan is now being examined in a series of public hearings by the Planning Inspectorate. As one of the parties that made critical consultation comments on the plan, we have the right to both submit written statements and to attend relevant sessions. This is a huge plan. There are three inspectors conducting the hearings which will continue until the end of March. 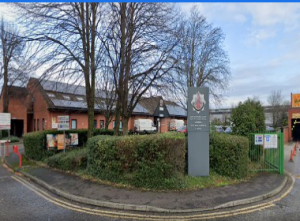 The venue for the hearings (via Google maps)

The first week has covered legal and procedural matters, the amount of land needed for building and the spatial strategy itself. We attended sessions on Thursday and Friday but also watched much of the livestream for the previous days. Our written submissions1 summarise and highlight points made in our “section 19” consultation response while our verbal contributions were able to focus and build on our submissions. We are told that everything submitted in both the consultation2 and in written statements will be considered as well as our verbal input.

The hearings follow a standard format with the inspectors asking questions, first of Greater Manchester Combined Authority (GMCA), whose team is fronted by a barrister, and then the other parties. The first three days illustrated the politics of development: massed ranks of developers, usually represented by their paid consultants or agents, sat along one side of the table, below the inspectors’ high table. On the other side sat community groups and individual citizens, mostly unpaid and voluntary. Despite the formal design of the hearings, they are conducted in a fairly informal way so that participants who are not used to such settings are encouraged and enabled to present their views. In fairness to all participants, the atmosphere is friendly and civilised despite our very real disagreements.  (Update: Place North West has an entertaining account of the first two days).

The procedural rules and agenda do nevertheless constrain the discussion, and this is a characteristic of the rules of the planning system itself rather than the individuals leading the sessions. So the discussion that we watched on day 1 of the flaws in the consultation process was limited to the question as to whether GMCA and the councils followed their Statements of Community Involvement (SCI) or not. This meant that questions of the quality of consultation were not deemed relevant, although the community groups did make their concerns known. An example: one authority placed a hard copy of the plan in each of its libraries. It did not make available paper copies of the supporting documentation. At the critical period, the libraries were apparently not open on Saturday or evenings, so someone working Monday to Friday would have great difficulty in accessing the plan. Because of the limited information and opening hours many people without broadband were unable to participate effectively in the consultation because 99% of the information was only available online. None of this apparently conflicted with the council’s SCI which committed to putting a hard copy of the plan in the libraries. Similarly the intelligibility of the very wide and long tables in the Integrated Assessment report, which would really require a multi-screen set up to scan and to make proper comparisons, and when printed have text too small to read, apparently did not contravene the legality of the consultation. As we have shown and argued elsewhere3, consultation on public policy is generally very poorly conducted.

We also watched the sessions concerned with how much land is needed for development. Clear evidence was presented by Save Greater Manchester’s Green Belt that the housing need figures used are inflated. CPRE endorsed the point that housing built recently exceeds the rate of household formation and there is a case for exceptional circumstances to be made for a different housing need methodology from the government’s prescribed standard one (we made the same call in our consultation response). GMCA reject this argument saying that they have adopted the “safe haven” of the standard methodology. That methodology uses 2014 population estimates which have since been shown to be inflated. Indeed we now have the far more dependable 2021 census figures. Some safe haven! Developers of course push for more and more building, reiterating that they support a higher figure. Lichfields for example pointed out that the standard method set the floor, the minimum need, not the number that will be built, which could be higher, yet they still advocated a higher level of economic growth as per the Plan’s rejected growth option 3. In this case the constraint comes from the government policy of using those outdated population figures to forecast housing need. No local authority to date has successfully argued the case for using an alternative method and there was a long process of lobbying by Greater Manchester leaders on just this point at an earlier stage of the process. Sadly they appear to have thrown in that towel and accepted the palpably absurd method.

We were similarly rather constrained by the parameters of the discussion on the sustainability appraisal (or more formally the Strategic Environmental Assessment, part of the plan’s Integrated Assessment). Here we had to argue that the assessment was not legally compliant, in other words not sound. While we think we, with colleagues from Save Royton’s Green Belt and Friends of Carrington Moss, did this, the argument from GMCA’s barrister was that so long as the assessment would be judged reasonable by someone (implicitly another professional) carrying out this assessment task then that was sufficient. In response we made the point that without any quantitative estimates of the carbon impact of doing all this building, it was impossible to either assess the environmental impact or compare spatial options adequately. Whether or not the sustainability appraisal met the requirement of legality, it did not provide GMCA with the quality of information needed to understand the environmental impacts of the plan. We will have to wait and see what the inspectors conclude. Meanwhile we have carried out our own evaluation which highlights the large carbon impact of all that building.

On this question of carbon impacts, there are some helpful precedents. Firstly, the sustainability assessment for the Cambridge Local Plan did make quantitative estimates of the carbon emissions from each of the spatial alternatives considered. While GMCA seemed to imply that this was an outlier, we would argue that it establishes a standard that other plans should follow.

Secondly, last year the controversial Tulip proposal in the city of London was rejected by the Inspectorate on the grounds that the very high levels of embodied carbon (i.e. carbon emissions that take place where the building materials are extracted, transported and processed) were not deemed to be justified by whatever benefit the tower might bring. The high, and difficult to mitigate levels of embodied carbon inherent in a programme as ambitious as Places for Everyone are a material consideration too in the light of the requirement to consider climate in Local Plans (Places for Everyone is a Joint Plan that covers the more strategic elements of the 9 districts’ Local Plans).

Update:  However, in two rather ominous developments, 1) we read that in West Oxfordshire, the Planning Inspectorate has decided to remove critical climate targets from the proposed West Oxfordshire Area Action Plan for a new garden village. The Town and Country Planning Association argue that the Inspectors have misunderstood the law in relation to carbon targets.  2) We have also been told that the Inspectors will not add our carbon impact report on Places for Everyone to the Examination documents database.

On Thursday, we were not alone in arguing that GMCA should have considered a spatial option that reflected current thinking in many world cities, that of the polycentric city or city region where citizens can meet most needs within their local area (often articulated as the 15 or 20 minute neighbourhood). Instead, GMCA persisted with what another participant characterised as a backward looking model with its specialist areas for housing, commerce and industry, which bakes in high levels of travel. While GMCA argued that they did not have to consider all possible alternatives, we contend that this is a well established alternative that forward looking cities should consider in these times of climate breakdown for improved liveability and attractiveness of localities.

One thing struck me with force: Places for Everyone would build on some 13 square miles of what is currently green space, much of which, but not all, is in the green belt that reaches into the conurbation, separating the distinct population clusters. Come the end of the plan, when that has been lost, should things continue in the same way (the threat of economic and social collapse4 suggests they might not, of course), then that green space will have gone, effectively for ever, and the developers will come again for yet more. Might we one day say, “the city is complete: let’s stop building”?

The sessions will resume after a two week break: there is a lot more to be said and covered, and we will be attending sessions on Sustainable and Resilient Places (Including carbon issues) and on Greener Places (Habitats Regulation Assessment).

4 See the Postscript to A Viable Future, our book referenced above.

1 Response to Places for Everyone hearings: the first week