Here is a summary leaflet about us.  You can download our publications (in .pdf format) at the links below.

All are free to download, but consider making a donation to our work.

Also available as a printed edition at our online shop.

This mini-book is for everyone concerned about the dangers we face from the current unviable economic system and who would like to explore an approach that integrates economic, social and ecological well-being.

It is a revision, some 60% longer, of our Viable Economy pamphlet from 2014, thoroughly revised and updated with additional diagrams, explanations, references and with two new sections on Care and Caring and the Built Environment. 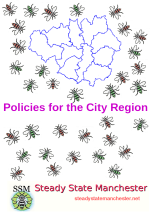 The full, 30 page version, fully referenced with explanations for our policy priorities and ideas. Policies for the City Region.

(And here is a short version)

See also this 2020 handout on policies at national, regional and municipal level. 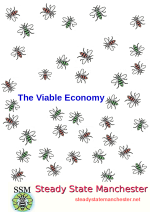 y” (2014), a pamphlet for everyone concerned about the dangers we face from the current unviable economic system and who would like to explore an approach that integrates economic, social and ecological well-being. (And here is a short summary)

In Place of Growth: Practical steps to a Manchester where people thrive without harming the planet.  Publication date, 13 November, 2012. 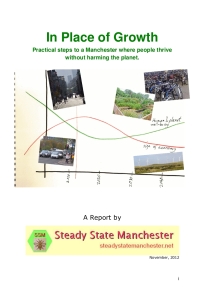 [or read without downloading]

How do we create a society with local prosperity and justice? How do we prepare
for the challenges that climate change and other aspects of the ecological crisis
are already bringing?  This was our first report, from 2012.  It has a wealth of relevant material and background to our approach of exploring the implications of the limits to growth at the regional scale.

Though the link between steady state economics and international solidarity may not be immediately obvious, the two issues are closely
connected in many ways. So how do we manage the transition to steady state in ways that minimise exploitation of people of the global South, and also minimise the shocks to their economies and livelihoods?

Policies for the City Region: Treading Lightly for Shared Prosperity.

Housing in the Viable Economy
October, 2016

So what would we do? Towards an alternative strategy for the city region (November, 2012)

We are critical of the way our city and regional leaders have generally tackled the difficult problem of economic, social and environmental viability. We see their approach as based on a fundamentally flawed model that puts the economy first and attempts to restore economic growth to our post-industrial city region in the context of a competitive global order.  So what would we do instead?
This paper is background reading for our Policies for the City Region: you can see something of the thinking process by which we arrived at the policy proposals.
Of related interest: A short reading list of critical resources on city-regional and other localised economies.

Living within limits to Growth – how do we do it?
Talk given by Mark H Burton, Steady State Manchester, Newcastle upon Tyne, 6 May, 2017.
It covers the following issues:

Communicating Climate Change in the Greater Manchester Region: a whole systems approach to change
Written for World Symposium on Climate Change Communication, Manchester, UK, 22nd-24th February 2017. (Or read the lay person’s guide which was the conference presentation.) The paper explores what Steady State Manchester is learning from public health and asks how this may contribute to the work of other climate change communicators.

Universal Basic Income: Is it the only cornerstone of a just society? (April 2017)
Reviews and compares UBI and several allied and alternative proposals.
Download pdf

Universal Basic Income – a participative  ‘learn-in’. (Sept. 2016)
Steady State Manchester and the Social Change and Community Wellbeing research group at MMU held a ‘learn in’ about UBI on September 8th  2016.  People came from all sorts of organisations  (or from none) and with different background knowledge of UBI. universal-basic-income-learn-in-summary

In Place of Pay Inequality (March 2014)
is a detailed study by Steady State Manchester and Equality NW into the pay policies of Local Authorities in the North West.  Launch, April 2, 2014
“It is rigorous, highlights important info well, well written and theoretically ground-breaking in terms of bringing together SSE, social value and equity issues.”
The report also explores,
– How public sector pay policies might play a leading role in making Manchester a more equal place.
– Ways to strengthen the accountability of Local Authorities for their pay policies and encourage them to implement stronger policies to reduce pay inequality within their workforce and via their suppliers in the wider local economy.
Downloads  SUMMARY  FULL REPORT    FULL REPORT (larger font version)

New evidence on decoupling carbon emissions from GDP growth: what does it mean? (April, 2016)
New evidence apparently suggests absolute decoupling in some economies, but is it real, is it enough, and will it last?  We critically reviewed the evidence. “A carbon literate contribution” – Carbon Literacy Project.  Download

Shaping the Viable Economy: The role of education

We are delighted that SSM has inspired Susan Brown to write: How can education help to shape a Steady State culture? A Discussion Paper’. We highly recommend that supporters read it. Below, and in more detail in the summary at the beginning of the paper, we draw your attention to its richness and contribute to the discussion that she advocates.

Food: a foundation for a steady state in Greater Manchester?  Report of a workshop organised by Steady State Manchester on 2nd November 2013

Recommendations from Steady State Manchester for Manchester City Council.  May, 2013.

Biodiversity in Manchester, by Dave Bishop, originally commissioned as part of the SSM project has (by mutual agreement) been published by Manchester Climate Monthly.  Second edition, via GM Environment Forum.

12 Responses to All publications